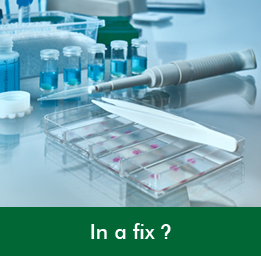 All samples used in IHC/ICC experiments must be fixed to preserve tissue morphology and retain the antigenicity of the target molecules. Fixation alters the chemical composition of tissues and often requires a compromise between preserving tissue structure and preserving the epitope. Incomplete fixation (underfixation) of cells or tissues may allow rapid proteolytic degradation of target proteins within the tissue and can reduce specific immunoreactivity. However, excessive fixation (overfixation) may result in masking of the epitope or in strong non-specific background staining that can obscure specific labeling. The method and timing of fixation must be considered in terms of sample preparation. In addition, duration, temperature, and pH will all affect the degree of fixation.

Formaldehyde is the most common fixative used to preserve protein targets within tissues and cells. Formaldehyde-mediated tissue fixation is thought to be dependent on the formation of protein-protein and protein-nucleic acid cross-links involving methylene bridges (-CH2-). Formaldehyde can chemically link NH2 (amino) and CONH (peptide) groups, NH2 and NH, or NH2 and NH2 groups.

Formaldehyde is a good choice for most IHC/ICC applications but is not a universal fixative. Overfixation with formaldehyde can modify the amino acids that are part of an epitope and can block an antibody from binding to it. However, in most cases the epitope can be unmasked to restore antibody binding using antigen retrieval techniques. Formaldehyde has been shown to induce intracellular translocation of phosphorylation-dependent epitopes from the membrane to the cytoplasm. In situations like this, ice cold absolute methanol or absolute ethanol are appropriate alternative fixatives.

Note: Although there are many different fixative available, formaldehyde is the most commonly used, and is an appropriate starting point for most IHC/ICC experiments. Formaldehyde-based solutions should be aliquoted and frozen, or stored at 4-8 °C for no longer than one month.

The most popular alcohols used for cell and tissue fixation are methanol and ethanol. The molecular structures of methanol and ethanol closely resemble that of water. Therefore, they compete with water for protein hydrogen bonds, replacing water molecules in tissues. This causes proteins to precipitate at their isoelectric points by reducing their dielectric constant, and can block antibody-epitope binding due to changes in conformation. While alcohols affect the tertiary structure of proteins by breaking hydrophobic bonds, it appears that they can stabilize the secondary structure of proteins.

However, it is generally thought that alcohols do not preserve tissue morphology as well as formaldehyde-based fixatives. Alcohols do not penetrate as well as formaldehyde and are primarily used to fix frozen tissue sections and cells. Consequently, alcohol fixation is more suitable for membrane surface antigens. Antigen retrieval is not recommended following alcohol fixation as it is generally considered too harsh and will likely compromise the integrity of the tissue sections or cells.

Acetone is a strong dehydrating agent, which can cause irreversible precipitation of tissue proteins. It is usually used on sections of unfixed, snap-frozen tissues, followed by fixation with alcohols or formaldehyde.

Whole animal perfusion fixation is often the best way to preserve antigens when studying intact tissues of small animals such as mice, rats, and guinea pigs. It involves replacing the animal’s systemic blood with a fixative solution. However, whole animal perfusion may not be sufficient to fix the tissues of interest. In cases such as these, dissected tissues can be immersed in the fixative. For example, 4% formaldehyde in PBS is a commonly used solution for perfusion and immersion fixation of tissues.

To enhance penetration of the fixative during immersion fixation, it is recommended that tissues be no thicker than 10 mm. For complete fixation, the volume of the fixative should be 50-100 times larger than the volume of the tissue. Fixation is usually achieved at room temperature for 4-24 hours. It is very important to optimize fixation conditions since underfixation or overfixation may reduce or abolish tissue immunoreactivity.

In contrast to tissue samples, cultured cells can be fixed for a shorter period of time with a less concentrated fixative solution. For example, fixation with a 2% formaldehyde solution for 20 minutes at room temperature is often sufficient to preserve both cellular morphology and antigenicity.

Note: Fixation can result in hydrophobic cross-linking of tissue proteins. The time, temperature, pH, and fixative used will determine the degree of cross-linking. Once the fixation protocol has been optimized, the same procedure should be used consistently.